The Greater Washington Association of Teachers of Foreign Language (GWATFL)

​The Greater Washington Association of Teachers of Foreign Language (GWATFL) is a non-profit organization focused on advocacy and professional development for World Language teachers in Washington, D.C., Northern Virginia, and Maryland.
​
GWATFL organizes two conferences for world language teachers a year. One in the Fall and one in the Spring. Teachers of any language, at any career stage, from diverse backgrounds and parts of the world are welcome to attend and submit presentation proposals. 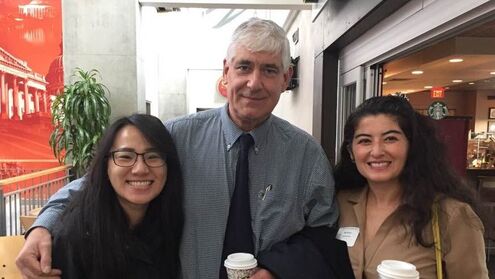 Luis Deocares joined The Greater Washington Association of Teachers of Foreign Language board in 2013 and has served as president of GWATFL since 2015. He has 25 years of language teaching experience, from elementary, middle, and  high school to adult learners. He began his career as an EFL teacher in his native Chile, where he worked for several years at the British Institute and private schools. He is currently a Spanish teacher at the National Cathedral school where he has been a language teacher since 2008. Mr. Deocares has experience and training in incorporating technology into the language curriculum. Luis holds a B.A. degree, Licenciatura en Educación mención Inglés and a postgraduate degree in Educational Technology from the University of Concepción in Chile.
Treasurer
Yi-Na Chung
Georgetown Day School
​E-mail: ychung@gds.org

Yi-Na Chung has 9 years of experience teaching second language acquisition to students from 1st to adults in the United States, Taiwan, and Cambodia. In addition to a B.A. in Applied Foreign Languages from the National Quemoy University in Kinmen, Taiwan, Yi-Na holds a B.A. in interdisciplinary Social Science from the University of West Florida. As of May 2014, she completed her M.A. in Education of Teaching & Learning at Clemson University graduating with honors. Yi-Na currently teaches Chinese at Georgetown Day school to students from 3rd grade to 8th grade. She dedicates her life to developing young students’ knowledge and understanding of the Chinese language. She has been a board member at GWATFL (Greater Washington Association of Teachers of Foreign Language) since 2014.
Board Member
Vicky Masson
Norwood School
E-mail: vmasson@norwoodschool.org

Vicky Masson has 15+ years of experience teaching Spanish as a second language in the United States. She graduated from Escuela Nacional Superior en Lenguas Vivas “John F. Kennedy” in Argentina and earned a B.A. in Humanities and a Certificate of Diversity Awareness from University of Maryland in the United States. Vicky is a Greater Washington Association of Teachers of Foreign Language (GWATFL) Board member since 2017, a former SmithsonianEdu Fellow,  a #TeachSDGs Ambassador, participant of ACTFL Leadership Initiative for Language Learning (LILL), and a 2020 HP Teaching Fellow. She is passionate about education, professional development, education technology, and global competence. @VickyMasson21
Board Member
​Karen Adamson
National Cathedral School
E-mail: kadamson@cathedral.org

Karen Adamson has 15+ years of experience teaching second language acquisition to students from PK to high school in the United States. She earned her B.A. in Journalism at the National University of Honduras. In 1996, she was the recipient of the “Amilcar Cruz Garin” Prize, given to the outstanding local journalists in Honduras. In the educational area, she was awarded the Lyn F. McNaught Award for excellence in teaching by Horizons USA. In 2014 and 2017 she was selected as "Best of DC GWATFL" to present her sessions at NECTFL. She is passionate about poetry, global competence, education, and professional development. She has been a board member at GWATFL (Greater Washington Association of Teachers of Foreign Language) since 2013. ​
Board Member
​Victor Vincent
Georgetown Day School
E-mail: vvincent@gds.org

Victor Vincent has 30+ years of experience teaching both Spanish and English languages. He has been part of the Board of The Greater Washington Association of Teachers of Foreign Language since 2004 (President of GWATFL between 2008 and 2011). He joined Georgetown Day School in 2003 after teaching Spanish at every level from Elementary to High School in North Carolina and Connecticut. Before coming to the USA in 1997, he directed a Language School in Madrid, Spain for 11 years. He earned a BS in Teaching (English and Spanish Philology) from the University of Madrid followed by a Master in Spanish Language and Culture from the University of Salamanca, Spain and a Master of Education from James Madison University.
Board Member
Donna Clark
Northern Virginia Community College
E-mail: dclark@nvcc.edu

Donna A. Clark earned her BA in Spanish at Morgan State University and her MA in Spanish from The Ohio State University.  She has been teaching Spanish since 1986, starting as a Graduate Teaching Assistant. From there, she taught Spanish at Howard University. Since 1991, she has taught Spanish at Northern Virginia Community College, where she is an Assistant Professor. She has been awarded study scholarships from NECTFL, AATSP and the Spanish Embassy. She has created and taught Spanish courses at the Prince William Criminal Justice Academy, Marine Base Quantico, Stafford County Sheriff, NVCC Workforce, Prince William County Government, PWC Police and the Virginia Department of Transportation.   She has been on the GWATFL board since 2005 and is especially passionate about language acquisition, study-abroad, mentoring and postsecondary instructor training.
Board Member
Mar Ramírez
The Congressional School
E-mail:

Mar Ramírez has 15+ years of experience teaching Spanish as a second language in the United States. She graduated from the University of Seville in Spain with a Licenciatura in Philology and earned her Master of Arts in Spanish Language and Literature at The Catholic University of America in Washington DC. She is currently teaching at The Potomac School in Virginia and is committed to promoting the importance of learning a second language and making global connections. Mar has been a Board member of the Greater Washington Association of Teachers of Foreign Language (GWATFL) since 2013.
Board Member
Sheena Jordan
Glenelg Country School
E-mail: sheena_hulin@msn.com

Sheena Jordan has been edifying young minds in foreign language for over 17 years.  Sheena earned her BA from James Madison University in Spanish and holds a Master of Arts in Intercultural Communication from the University of Maryland.  In 2017 Sheena was selected as the GWATFL Teacher of the Year and went on to become a teacher mentor at the 2019 NECTFL (Northeast Conference for Teachers of Foreign Language) for new teachers in the world language profession.   Sheena is the Diversity Coordinator at Glenelg Country School in Maryland and is committed to increasing social justice awareness in the world language arena. Sheena has served on the GWATFL board since 2018.